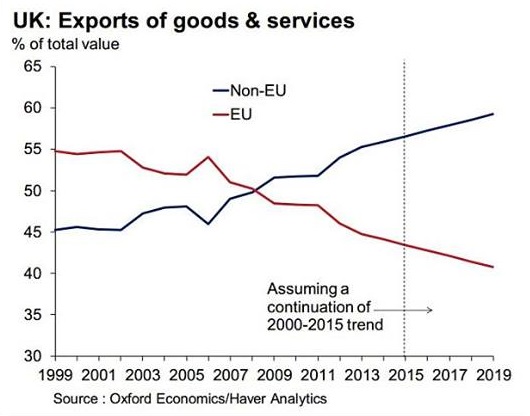 However, what they fail to recognise is that every year from 1993 right through to the latest set of figures available the UKs exports to other EU countries in value terms have INCREASED.

So why is the percentage falling? I hear you ask.   Allow me to explain:

As a result of having better access to Rest of World (RoW) markets, the UK has been increasing its exports in terms of value to nations all around the world.   And while we export mostly goods (around two thirds of UK exports) to the EU nations, our exports to RoW is mostly made up of financial services.

As the value of exports to RoW countries are increasing faster than the rate of increase in value of our exports to the EU this means that the percentage of EU exports of the total falls.

The LeaveEU campaigns have jumped on the fact that the %age to the EU is falling and claimed that this is a reason why we should leave he EU – however, this is a false premise.   The truth is that the UK is able to trade all over the world, wherever and whenever we want to and we are getting more successful.

A vote to leave the EU will not make trade easier anywhere, we already trade around the globe – leaving the EU will make all our trading more difficult.